Saleh Al-Rasheed is the Governor of Small & Medium Enterprises General Authority Monsha’at. Work on developing a special strategy for small and medium enterprises and establish institutionalized work in the Authority and implement the work plan for that purpose. Support the target enterprises to reach funding. Where the percentage of the loans dedicated to small and medium enterprises increased by 22.6% with the total loans reached 117 billion Riyals. Moreover, launched the Saudi Venture Capital Company in order to invest in emerging companies with investment amounted to 2.8 billion Riyals. Increase the number of small and medium enterprises by 23.4% during two years 2017-2019 along with increasing their revenues by 15.7% during one year. Support enterprises to reach markets where the percentage of the government payments to small and medium enterprises for government procurement increased and amounted to 26% by the end of Q3 2019. Moreover, the commercial franchise was developed and the number of funding companies in this area reached more than 21 brands. In addition, the e-business for emerging and existing enterprises was developed and their capacities were built. Work on ease of doing business where the Kingdom was ranked 1st among the best countries in Doing Business Index 2020. The Kingdom jumped more than 30 ranks to occupy the 62th at the global level. Moreover, global competitiveness indexes wherein 2019 the Kingdom was ranked the 7th in the index for the growth speed of innovative companies, was ranked 12th in the index for the ease of getting venture capital investment and other indexes that show considerable improvements as well.

He was the CEO of Riyadh Airports. Work on privatization in a comprehensive institutional transformation program, from governmental sector to the privatization of all services, businesses, assets and properties, and maximize revenues. Increase competency, reduce expenditures, increase revenues and the company became self-operated. Moreover, improve the level of services provided to travelers and investors as well as transforming the company into benefit center covering its costs while providing profits to the owner entity.

He was the General Manager of The Saudi Authority for Industrial Cities and Technology Zones. Institutional excellence and automation of services. Moreover, re-design, develop and measure the performance of the procedures followed. In addition, activated business innovation and the unique training programs as well as on-the-job training. Contribute to the increase of the industrial and investment contracts as well as establishing new factories and attracting global industrial companies. In his era, the private sector investment in industrial cities witnessed a substantial increase. The industrial cities remarkably increased to reach 35 industrial cities. 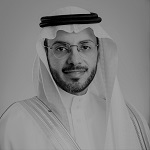